This year’s Apple MacBook Pro MF839LL/A looks the same as the previous model. But it received some neat updates inside, with a fifth-generation (Broadwell) Intel Core i5 processor and the new Force Touch trackpad, which gives it more functionality, especially on the mouse clicks. For those using the 2012 model, it might not be of much interest, but if you’re hanging on to an older MacBook with an optical drive, it is a worthy upgrade.

The MacBook Pro with Retina Display boasts of a mix of speedy performance, bright and crisp Retina Display, battery life that will last for more than a full-day, and excellent portability that make professional and enthusiasts users crave and willing to pay the price.

If the features and the premium look are anything to go by, then the new MacBook Pro gets a nod in the Editor’s Choice in high-end ultraportable laptop, replacing the MacBook Pro 2014 version. And while I have not had a chance to test the new MacBook 12-inch just announced by Apple, I know from my hands-on time that it makes many concessions in the name of ultimate portability.

In terms of design, Apple hasn’t given the MacBook Pro line a facelift over the past few years from the bigger MacBook Pro. The new version released in 2015 spots the same aluminum and glass construction, measuring 0.71 by 12.23 by 8.62 inches (HWD) and weighs in at 3.41 pounds (imperceptibly up from last year’s version).

The MacBook Pro 2015 is thicker and heavier than its main rivals like the Acer Aspire S7-392-5410, but is surprisingly lighter than the Toshiba Satellite Click 2 Pro P35W-B3226, when the latter is connected to its keyboard dock.

I found the backlit keyboard still comfortable to use, with a good bargain between key feel and solid construction. During the tests, I placed the new MacBook Pro next to the Apple MacBook Pro (2014-version) and the Apple MacBook Pro, and even hecked the 2012 VINTAGE from a friend, and honestly I was hard pressed to tell which is which. In the new MacBook Pro you continue to get excellent connectivity, in terms of an HDMI port, two Thunderbolt 2 ports, an SDXC card reader, two USB 3.0 ports, along with 802.11ac and Bluetooth 4.0 for wireless.

This connectivity options are better than on competitors like the Dell XPS13 Ultrabook or the Lenovo Yoga 3 Pro. The real show here must be the 13.3-inch, with 2,560-by-1,600-resolution Retina Display. With this resolutions it still manages to wow, though other systems like the QHD+ (3,200 by 1,800) Lenovo Yoga 3 Pro and Dell XPS 13 Touch have caught up and surpassed MacBook Pro laptop screens in number of pixels displayed. The Retina is an LED-backlit In-Plane Switching (IPS) panel, with a scaled and smoothed display so that text and numbers are sharp, but don’t appear too small.

The new MacBook Pro has the power and packs the necessary oomph to deliver on your complex projects. Thanks to its Intel Core i5-5257U processor, the system belittles the competition. On performance, it outpaces models like the Intel M-equipped Lenovo Yoga 3 Pro, the Intel Core i5-powered Dell XPS13 and Samsung ATIV Book 9, and even some Intel Core i7-powered systems like the Toshiba KIRAbook 13 i7s Touch and the Toshiba P35W-B3226 Click 2 Pro 13.3 Touch.

This year’s model saw some improvements from last year’s version, especially on the 3D tests. The Intel Iris 6100 built into the Intel Core i5-5257U gives up to 19 frames per second (fps), which is better than rival Windows PCs, most of which barely go out of the low teens on similar tests. If you want to run moderately taxing games such as Diablo II and Torchlight 2. That said, more strenuous games like 2014’s Tomb Raider may require you to drop quality to low settings.

The big news (aside from the new processor) is that the latest MacBook Pro 13-inch now comes with a Force Touch trackpad. Instead of the traditional mechanical clicking mechanism found on older MacBook Pros, the new trackpad doesn’t move at all. Press down on it, however, and you’ll still hear and feel a click. This is due to the haptic feedback from the trackpad. Instead of pressing down, the surface of the trackpad buzzes, similar to the force feedback you feel on a PlayStation or Xbox controller.

A sensor built into the pad senses if you’re pressing it, and moves a weight, which fools your fingertip into sensing that there is vertical movement. The sensor can detect pressure, so if you press a little harder, the touchpad will click a second time, and activate the Force Click function. In practice, it does feel like two separate physical clicks.

The base MacBook 13-inch retains 8GB of memory and a 128GB Flash Storage module (analogous to a solid-state drive or SSD) as a boot drive, which are both the same capacities as last year’s model. The Flash Storage module has a faster 1.6GBps top throughput, which you probably won’t notice unless you do a lot of active video editing or other intense local file operations. Apple OS X Yosemite 10.10.1 is on board, and like with previous MacBook Pro systems, you’ll also get access to preinstalled copies of iLife (GarageBand, iMovie, iTunes, etc.) and iWork (Pages, Keynote and Numbers).

Battery life was excellent in my test, at 11 hours 10 minutes, beating all comers, with the exception of the Samsung ATIV Book 9 2014 Edition (11:26) and last year’s MacBook Pro (13:41). We can surmise that the faster Core i5 processor and/or the PCIe Flash Storage has a bit more power draw, but in any case, 11 hours is still much more than the 7 to 9 hours you’ll get from the competition. Make no mistake, you can go all day with this laptop.

The new Apple MacBook Pro is a worthy upgrade, especially if you’re looking forward to replacing the now discontinued 2014 MacBook Pro Model. Sure, it does score a half-point lower than its predecessor, but the mix of premium design, high-speed ports, stable processor performance, excellent battery life, and Force Touch Trackpad are features well the premium.

The MacBook’s single USB-C connector preclude it from many professional settings, where you’re constantly expected to connected the laptop to multiple displays, hard drives, and other peripherals like drawing tablets. Meanwhile, the Apple MacBook Pro 13-inch, Retina Display will continue to serve Apple fans and professionals alike, who need more power and a higher-resolution screen than on the MacBook Air line. 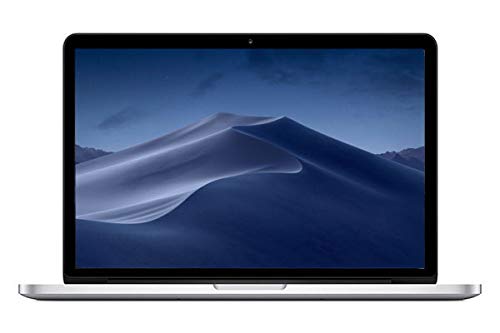