How can a midrange gaming laptop like the ASUS FX502VM-AH51 beat the competition without necessarily dominating the obvious gaming benchmark tests? By remaining competitive, while coming in for far much less, and eschewing competitors on a feature-by-feature basis. That’s how. The FX502VM comes with a sixth-generation Intel Core i5-6300HQ processor and the latest Pascal-based Nvidia GeForce GTX 1060 3GB discrete graphics.

To that, it adds 16GB of memory, a 1TB storage hard drive, a 15.6-inch In-Plane Switching (IPS) display, and ergonomic features that make gaming more comfortable. The fact that it packs so much and still comes in at a reasonable price, gives it the oomph to jump to the top of the heap, replacing the ASUS K501UW-AB78, as our latest Editors’ Top pick for midrange gaming laptops.

The ASUS FX502VM undeniably looks beefy, thanks to a design that mimics the Republic of Gamers (ROG) line with its imposing curves and the ‘ASUS’ label on the lid. Its matte-black chassis measures 0.9 by 15.4 by 10.5 inch (HWD) and weighs 4.9 pounds. The 15.6-inch, matte-finish In-Plane Switching (IPS) display gives you the benefit of both a wide viewing angle (up to 160-degrees) and reduced reflections from ambient lighting.

It’s a bright screen with a 1,920-by-1,080 resolution, which on first flush can seem a little small when high-end ultraportables have 4K screens like the MSI VR Ready GS73VR Stealth Pro, but 1080p is better for mobile gaming. For such a small machine, butter-smooth 3K or 4K animation would require at least three GPUs, which is quite impractical on a laptop. For instance, the GS60 GHOST PRO 3K-097 has trouble keeping up with smooth frame rates at its native resolution of resolution of 2,880 by 1,620. The FX502VM does a fine job at native resolution with all the eye candy turned on.

The red, backlit, chiclet-style keyboard is comfortable blends well with the black chassis, and is among the comfortable keyboards have used lately (offering up to 1.6mm key travel distance), with enough space for a full numeric keypad. The touchpad is very responsive, and it features highlighted WASD keys, which make it comfortable during long gaming sessions.

Speakers are loud and clear, with a subwoofer for a little extra low-end sound. The system has dual rear vents, so heated air is channeled away from the user. If you need to carry it around, you can slide it into the Bonvince 18.4″ Laptop Backpack, which has nicely placed compartments for the power adapter, mouse and other peripherals.

Connectivity is excellent. The sides are choked with I/O ports, including: an Ethernet port, a headset jack, an HDMI port, a line-out jack, one USB Type-C (Gen 2) port, D-Sub and a mini DisplayPort. Wireless connectivity comes via Integrated 802.11 AC  and Bluetooth 4.0. If you occasionally binge on movies, the Nvidia GeForce GTX 1060 can drive up to four displays simultaneously (the internal display, HDMI and mini-DisplayPort/Thunderbolt and D-Sub), allowing you to have game screens, instant messaging, Web browsing, and a movie all playing at once).

The quad-core Intel i5-6300HQ processor runs at 2.3GHz stock speed, paced by 16GB DDR4 system memory. It has potential to make processing faster, up to 3.1GHz in Turbo Mode, but we tested the system in the stock configuration. The Nvidia GeForce GTX 1060 3GB discrete graphics is based on the latest Pascal-architecture, and it brings desktop performance to mobile machines. In testing, the system delivered smooth frame rates per second (FPS) on most modern titles, such as Rise of the Tomb Raider (48 FPS); Shadow of Mordor (87 FPS); Hitman (49 FPS); and, Grand Theft Auto V (59.2 FPS).

Its gaming benchmarks are way better than most Core i7-powered laptops equipped with Nvidia GeForce GTX 980M GPUs. Similarly, the FX502VM-AH51 being a light-weight laptop, it does suffice as an all-around fast performer for work and media projects. The system comes with a 1TB 7,200rpm SATA hard drive. That’s plenty of space for games, movie files, music, photos, and myriad other programs.

Battery life is average for a gaming laptop, at 3 hours 7 minutes on our battery rundown test. That’s within a few minutes of the three hours and change garnered by the Alienware 17 (2014) and the Origin EON 17-S. The outliers are the Origin EON17-SLX (1:13) and the battery champ Asus ROG G750JZ-XS72 (5:32). Basically, all of these systems will work untethered for a short period of time. Gaming-oriented processors and large screens tend to drain battery life quickly.

So how does the ASUS FX502VM-AH51 end up on top? By beating the former Editors’ Top Pick ASUS K501UW-AB78 on better ergonomics, double the system memory, and much more storage, though the ASUS K501UW-AB78 still holds its own with an Intel Core-i7 processor, NVIDIA GeForce GTX 960M and a snappier 512GB SSD. Simply put, while the FX502VM-AH51 may not have the best extreme performance scores as we lean closer to the high-end gaming category, it manages to beat competitors on a feature-by-feature basis. For all these reasons, the ASUS FX502VM-AH51 deserves the award of our Editors’ Top Pick midrange gaming laptop; thus, an easy choice to recommend. 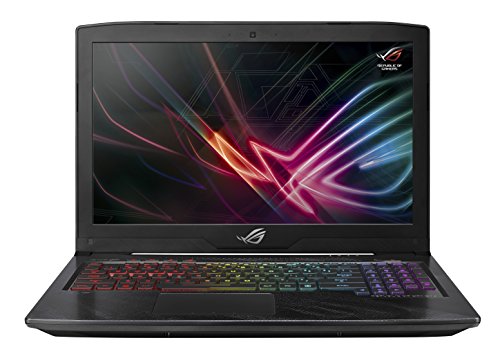