Apple lauded its minuscule MacBook during its debut last year as the thinnest and lightest ultraportable in the market, with a refined design from Apple’s mobile hardware labs. Somehow, we were convinced it was a matter of time before a PC maker took a leap at a similar design. It hasn’t been long. Enter the ASUS ZenBook 3, a miniature ultraportable that takes as close as you can get to the Apple MacBook; that only falls short of laser imprinting an Apple logo into its aerospace-grade aluminum body. At less than half an inch thick, it doesn’t skimp on processing power as it packs much faster hardware–7th Generation (“Kaby Lake”) Intel Core i7 processor. This is the first we’ve had our hands on from ASUS but we expect more in coming weeks.

The ZenBook 3, though attractive on the surface, it is still a reminder that ASUS has a lot to learn. For instance, even though they have managed to mimic the MacBook’s design and cram into the system faster hardware, the keyboard and trackpad are not any close to the Apple experience. Perhaps the fact that it costs far much less than the competition might make us overlook the rough edges here-and-there. Nevertheless, with an ultraportable that’s this thin and light, you’ll have to make a few feature tradeoffs, thus, making the result worth it.

At a glance, the ZenBook 3’s design screams ‘luxury’. At an impressive 11.9mm thickness, it looks premium thanks to an aluminum alloy case that is both smooth and sleek in angle. In fact, ASUS’s ZenBook line has always been attempting to grow into MacBooks, with unrelenting emphasis on thin profiles and all-body metal cases. The ZenBook 3 has gone a notch higher. I was particularly impressed by the deep shade of avant-garde blue with gold accents (in our review unit); though it comes in two colors, so you may opt for the grayish silver color theme.

The laptop measures 0.47 by 11.65 by 7.53 inches (HWD), and it weighs only 2.1 pounds. The slim profile can slide into just about any bag or folio, and it won’t be a burden if you need an ultraportable to tote around. If portability is your worry, here is how it compares with the competition. The ZenBook 3 is a millimeter thicker than the HP Spectre 13, but if you need an even light and thinner Windows PC, you’re safe with a Microsoft Surface Pro 4. Still, the ZenBook 3 is more portable than the Dell XPS 13 Touch, and even thinner and lighter than both the Apple MacBook or the 13-inch MacBook Air.

On the 12.5-inch is, by far., one area where ASUS managed to eschew the MacBook by half an inch. In fact, the 12.5-inch full HD (1,920-by-1,080) screen is maybe the major selling point for this system. I found it to be gracefully bright and colorful, though it doesn’t come with a resolution that is quite high as the screen on the competing Apple MacBook (2,304-by-1,440) or the Dell XPS 13 Touch (3,200-by-1,800); but it is certainly good enough for most day-to-day computing needs. If you want a higher resolution for photo and video editing projects, then the XPS 13 Touch, the 4K version of the Razer Blade Stealth and the Apple MacBook Pro 13-inch score well.

We really don’t expect to have an ultraportable with a keyboard that’s an afterthought, and ASUS engineered the ZenBook 3’s keyboard to perfection from the start. Here we are looking at a well-designed backlit keyboard–with gold lighting that stretches from edge to edge, with only 2.1mm of bezel at each side and a key pitch of 19.8mm, which is similar to most desktop keyboards. Still, even though it is thin, there is still an impressive 0.8mm key travel, almost twice what we see in rival ultraportables.

The travel is deeper and much more comfortable to use than the keys that barely move on the 12-inch MacBook, though we’d still recommend the Dell XPS 13 Touch if you type for a living. To that, add a cleverly engineered touchpad designed for maximum comfort and accuracy, with a glass cover while at the same time incorporating palm-rejection technology, Smart Gestures and handwriting support.

In addition to the impressive keyboard, you have a Fingerprint Sensor that gets you to the desktop in less than a second. I was impressed by the fact that the built-in fingerprint sensor on the touchpad and Windows Hello didn’t ask me to type in a password every time I logged in.  For a start, I found the touchpad to be a bit slick and took me time to get used to during the test period. Nevertheless, the four Harman Kardon-branded speakers above the keyboard are clear and audible enough to fill a medium-size room. I was able to hear a little fan noise from time to time, which is something you can never experience with Core M-powered systems like Apple’s MacBook.

Port selection is very mean, as the system only has a single USB-C on the right side and a headset jack on the left. The 12-inch MacBook also comes with a single USB-C port; there seemingly isn’t a lot of space on the system, but web can justify that since even the thinnest HP Spectre 13 has three USB-C ports. There is yet another technology missing on the ZenBook 3, which is Thunderbolt 3, which is present on both the HP Spectre 13 and the Dell XPS 13 Touch.

While most users will argue that Thunderbolt 3 is far from a requirement, but it is a must have, especially if you’re going to be transferring large files like 4K videos. The single USB-C port serves as the port for the included charger, meaning you can’t connect a USB-C drive and charger simultaneously. Everything is not dark though, ASUS are generous enough to include a mini dock with a USB 3.1 Type-A port and an HDMI jack in addition to a USB-C port that can only be used with the charger.

Having 512GB SSD storage and 16GB RAM is both generous and impressive, thus, it should keep you satisfied for several years. The 16GB system memory is more than enough for multitasking, and if you’ll be working on multimedia projects, it will be enough, and after all, that’s one of the reasons you consider a Core i7 machine over a Core i3 or i5 system. This configuration comes with Windows 10 Pro which is standard lately for premium laptop since it will easily integrate the interface with your company’s file and login servers.

The ASUS ZenBook 3 is the second system we’ve tested equipped with Intel’s 7th Generation Core (Kaby Lake) processor family: a Core i7-7500U processor with integrated Intel HD Graphics 620. So far, this combo is potent enough to deliver class-leading performance on most day-to-day tasks like document editing, Web browsing, and video conferencing. What’s truly impressive about this system is how ASUS managed to fit in a Sky Lake processor and gobs of memory in such a tiny machine. The processor spits speeds of between 2.7GHz and 2.9GHz, with the 16GB of LPDDR3 RAM clocked at 2,133MHz; which even exceeds Intel’s official maximum speeds of 1,866MHz for its latest chips.

All these give the ZenBook 3 enough muscle to outperform systems like the Apple MacBook, Dell XPS 13 Touch, and HP Spectre 13. Look at it, the MacBook is still stuck with slow m3 and m5 CPUs and a maximum of 8GB RAM. We expect that Apple might refresh it soon, now that we have the seventh-generation CPUs trickling into the market, but as it stands now, ASUS wins the spec battle.

Battery life was excellent during our rundown tests. The ZenBook 3 lasted an impressive 11 hours 56 minutes, with continuous video playback, which is one of the major optimization in the latest Kaby Lake processors. It eschewed the MacBook Pro (11:08) and he 12-inch MacBook (11:34), which were our former champs in battery life. To some, it will be surprising to see such a compact system pull good battery life, but the truth is that it uses a group of separate flat battery packs shaped to fit into the contours in the casing. These give the system the oomph to outlast other Windows laptops like the XPS 13 Touch (9:02), HP Spectre 13 (8:36), and the Razer Blade Stealth (6:25).

Finally, ASUS have hit the soft-spot in the ZenBook 3, by shrinking a Core i7 laptop to impressively slender proportions–only allowing the HP Spectre 13 to be thinner. Although many will argue that the ZenBook line is “Apple Inspired”, this system manages to be certainly faster and is comfortable to type on than the MacBook, and has longer battery life, though the Apple MacBook remains unbeaten on its higher-resolution screen.

On the other hand, the Dell XPS 13 Touch is a different animal, that boasts a much higher-resolution touch screen, has better connectivity (two USB 3.0 ports, a USB-C port with Thunderbolt, and an SD card reader), but has a previous-gen processor, less storage space and less system memory. To that end, the ASUS Zenbook 3 meets; and, even exceeds our expectation for premium ultraportables: speedy, enduring, thin, extremely light weight, beautiful screen, good aesthetics and sturdy build quality. All these are enough to award the ZenBook 3 as our latest Editors’ Top Pick for premium ultraportable laptops. 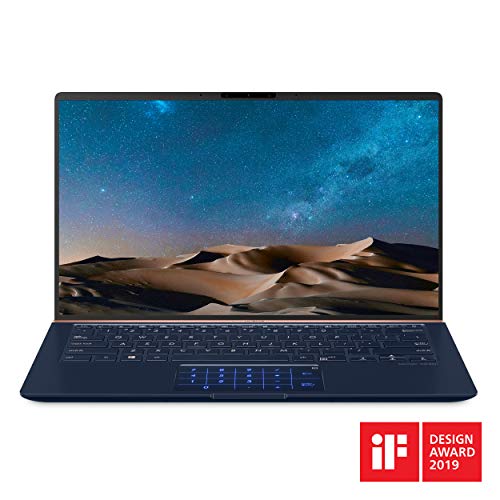