The CyberpowerPC Gamer Extreme GXiVR8020A7 is one of the best gaming PCs for gamers who want to spend under $1000 without sacrificing much in the way of power. Packing an Intel Core i5-9400F processor and AMD Radeon RX 5500 XT graphics card, this desktop can run modern games at high settings and even run complex productivity apps without much sweat. Better yet, the Gamer Xtreme is very easy to open up, making it a great starting point for gamers who need to eventually upgrade to more powerful parts.

Now you have a Gamer Extreme that looks like the high-end, more expensive Gamer Supreme gaming desktop. It’s a premium design, and we love it, given that the standard tower is built to allow gamers easy access for future upgrades. Again, the LED-lit design is beginning to show its age in the wake of minimalist, yet powerful desktops, like HP’s Omen Obelisk or Dell’s Inspiron.

The front panel is plain glass with a white background and a transparent side panel with a pair of LED concentric circles and another one on the rear fan panel. The other lighting is on the internal cooling fan with a CYBERPOWERPC logo pointing towards the transparent side glass panel. Both the bottom and rear panel have ventilation holes, as does the top. The glass window not only helps showcase the technology, but also add visual interest.

This CYBERPOWERPC Gamer Xtreme GXiVR8020A7 doesn’t have an optical drive, which is fine given that these days you occasionally need to play from DVDs, as most PC games can be downloaded from digital services like Steam and Origin. Plus, having one on the front would be a scratch on the case’s stylish austerity. As it is, there are easy-access ports on the top panel (towards the front): two USB 3.1, microphone and headphone, and a Reset button.

On the back, it’s a completely different story, it’s there you find the rear panel ports: two USB 2.0, four USB 3.1, one RJ-45 Network Ethernet, and Audio 7.1 channel. The new GXiVR8020A7 graphics card also includes one HDMI and one DisplayPort, for extending the display when you need to connect to more than one monitor.

Like most gaming PCs, the Gamer Extreme GXiVR8020A7 handles everyday productivity better than most desktop PCs. No matter how many programs you need to run simultaneously – Chrome, Slack, Microsoft Office, Netflix and more – the 2.9Hz Intel i5-9400F processor and 8GB RAM beefy enough for most tasks, with no discernible loss in speed or fidelity.

With the Radeon 5500 XT (8GB VRAM) AMD answers Nvidia’s recently released GeForce GTX 1650 Super in a not-so-cool manner. It’s codenamed Navi 14, and it finally delivers a punch at a very competitive price, but packs 1408 cores and 88 texture units, which is quite strong for 1080p and in some instances 1440p gaming. Since the Navi 14 is outfitted in an entry-level gaming PC, our gaming benchmarks will focus on 1080p gaming.

Compare and contrast these numbers with our category averages: 50 for Assassin’s Creed Odyssey and 63 for Tomb Raider and you just realize how the CyberpowerPC Gamer Extreme GXiVR8020A7 works quite well. While I wouldn’t trust the system with 4K or 1440p, resolutions, the GXiVR8020A7 provides a solid gaming experience.

The Gamer Extreme has long been a favorite at top online retailers, and for a good reason. In addition to its strong performance and fairly low starting price, this gaming machine has a fairly sleek and flashy design, complete with RGB lighting both on the fans and within the case. And, you also get a CyberPower keyboard and mouse right out of the box, so you end up spending less on extra accessories and more time fragging your favorite games online.

We like the Gamer Extreme. It provides smooth performance for 1080p games, along with productivity options. The chassis looks gorgeous; and, it’s not too expensive as gaming PCs go.

However, if you need to play 4K games at solid frame rates, the HP Omen 875-1023 is among the best you can get around, thanks to its Intel Core i9-9900K processor, Nvidia GeForce RTX 2080 Super graphics card and 32GB RAM and 1TB SSD storage. But given the CyberpowerPC Gamer Extreme GXiVR8020A7’s easy upgradability, good pricing and solid performance, this gaming desktop is more future-proof than even your typical console. 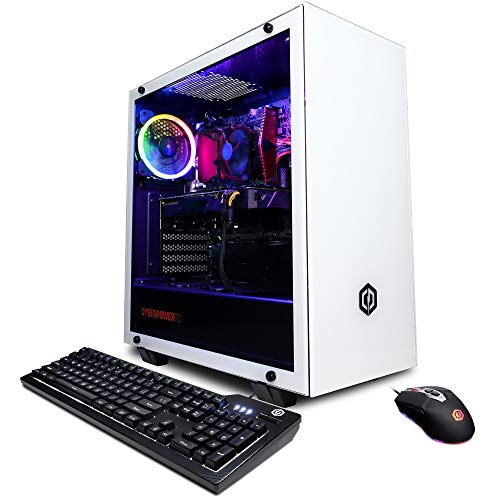